Home About News Releases One award is nice, but ...

One award is nice, but two is so much nicer! Sherlock’s ANTI-THIEFT ad campaign has been rewarded anew!

Longueuil, June 10, 2014 — After winning the 2014 CRÉA Grand Prize in the TV advertising campaign – Service category for its Anti-Thieft ad campaign last April, on June 5th, Sherlock along with its agency, Bleublancrouge, was awarded the 2014 STRAT Grand Prize at the 8th edition of the Strat Competition, which recognizes the best communication-marketing strategies in Québec.

Resale is the root of the automotive theft problem, which is why the Sherlock antitheft marking system chose to make this the direct focus of its communication-marketing strategy.

“We sought to explain to the consumer that, in eliminating the resale potential of a stolen vehicle, Sherlock has made itself the enemy of car thieves, since it quashes their primary objective. Sherlock therefore protects a vehicle by attacking the source of the problem, the thieves’ motivation,” states Simon Cazelais, Vice-President, Consulting at Bleublancrouge.

“By using a thief as the advertising spokesperson, we remind Quebecers that automotive theft is ever present and that, despite the humorous tone of the interventions, this is a matter that must be taken seriously,” notes Anne-Marie Jodoin, General Manager of Sherlock Antitheft Marking. 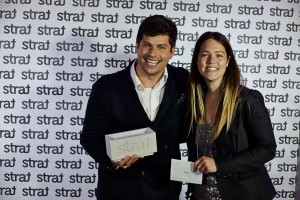 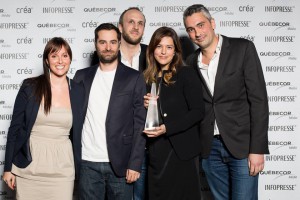 Anne-Marie Jodoin, from Sherlock, surrounded by the Bleublancrouge team at the prix CRÉA Awards night.

To view the Anti-Thief ad campaign, go to http://www.sherlock.ca/en/about-us/

Founded in 1983, Sherlock Antitheft Marking today is the industry leader in the fight against auto theft in Quebec. Since it was founded, more than 900,000 vehicles have been marked, thanks to its distribution network of more than 650 services outlets. The company enjoys the support of the most reputable insurance companies and works in close collaboration with all of Quebec’s police forces. Sherlock is recommended by the APA (Automobile Protection Association) and is involved in the community via Info-Crime Montréal. http://www.sherlock.ca/en

Bleublancrouge is a Montreal-based, full-service marketing communications agency that has been delivering game-changing international campaigns for the past thirty years. It has been recognized as one of Canada’s top ten creative agencies and has an impressive roster of clients that includes AIRFRANCE/KLM, Bell, Loto-Québec, PPG (Sico) and the Quebec Toyota Dealers Association. See how the team is exploring a new era in communications at http://www.bleublancrouge.ca/en.